The Streets of SAN FIASCO! 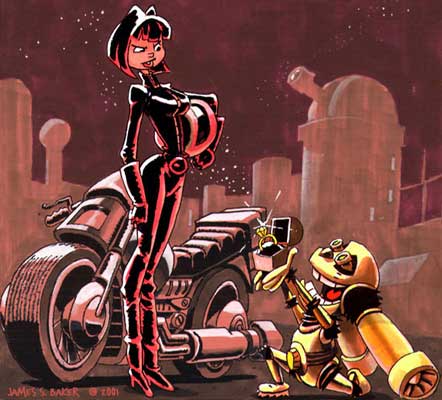 In a world much like our own, though unlimited by physics, common sense, or even good taste, the bayside city of SAN FIASCO is home to a colorful population of animals and humans, and the job of enforcing the law is every bit us unorthodox as the place itself.

Of all the crime fighting heroes who battle the forces of evil (and extreme naughtiness) in the streets and skies of San Fiasco, The fan favorites are...

ROCKET RABBIT and the Professor! 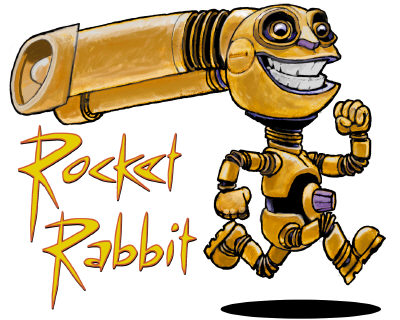 The San Fiasco media nicknamed him "Rocket Rabbit" because of his long rabbit-ear shaped thrust-pods, but his real name is Prototype X2. However, that information is classified, so most people just call him Rocket.

Designed as a crime fighting machine, Rocket is loaded up to (and including) his eyeballs with crime-fighting, ass-kicking, laser-shooting high tech gadgetry.

Though made of metal and kevlar he is very human. Rocket fancies himself to be equal parts smart bomb and smart ass, but he is not capable enough to run a solo mission which is why he is partnered with... 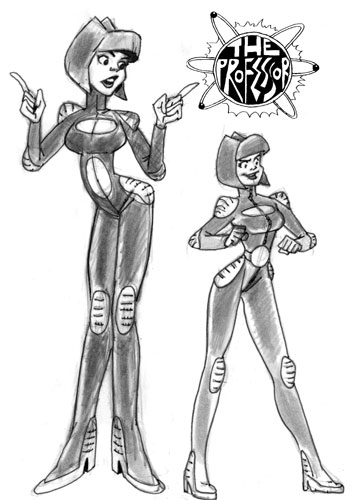 The Professor
She is not only the inventor of Rocket Rabbit, she is also his crime-fighting partner and she provides most of the brains and detective skills of the duo.

Her plethora of gadgets and her natural athleticism make her a formidable physical presence as well.

A mysterious figure, she always works under a shroud of secrecy, and the file on her is slim, though it is known that she is multi-lingual and has a degree of Robotix from the prestigious Hardnox University.

Less is known about her background, as she has had so many aliases, and lived such a checkered past, that she has forgotten her own real name.

It is widely rumored that She was hidden from her own family and raised in secret by bears from the Moscow circus.

The mixed nut bag that is our assortment of guest characters and villains provides some of the main laughs of the stories. The Big Suit:
A When not hosting Jacuzzi cocktail parties inside the giant mechanical suit that he calls "home", this small, pink and naked, cigar smoking man tries to keep Rocket and the Professor's cases on schedule and on budget.
No matter how far afield their cases may take them, Rocket And the Professor can be sure that The Big Suit will be in constant radio contact, typically checking in just as the crisis comes to a head. He is part sports coach, part Hollywood agent, part line producer and one hundred percent, pedigree bean-counter. Along with the other Big Suits, who sit on the board, he also runs San Fiasco's top crime fighting Franchise, known as The Company™. The Deeks:
Aliens, who are constantly trying to invade and conquer the world.
Luckilly for the citizens of San Fiasco The Deeks but are amazingly inept despite their amazing technology and elaborate plots, and consequently often get a thumping at the hands of Rocket and the Professor... here are some samples of page layouts done while making the comics. 4 of these thumbnails fit on a 5.5x11 sheet of paper. Click the images for a closer view: 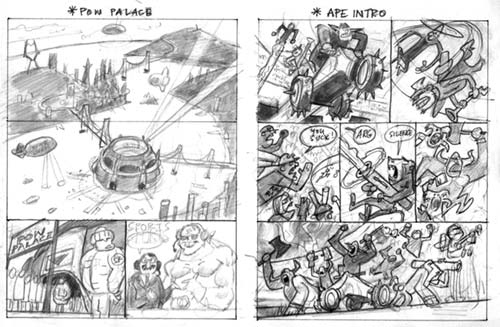 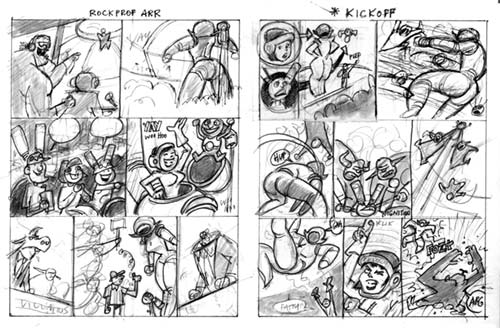 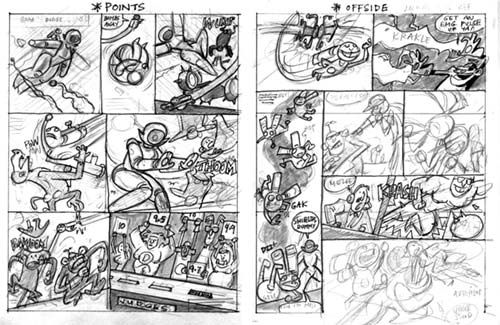 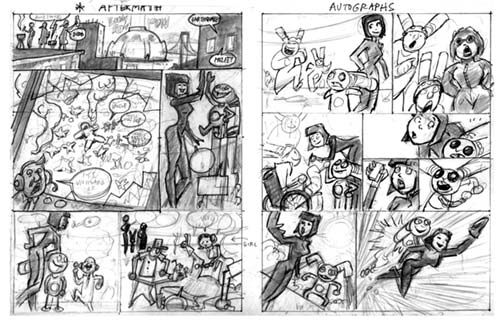 FINAL inked pages for the thumbnails above can be seen here:


As you can see, I expanded the action in the last page thumbnail into TWO pages. 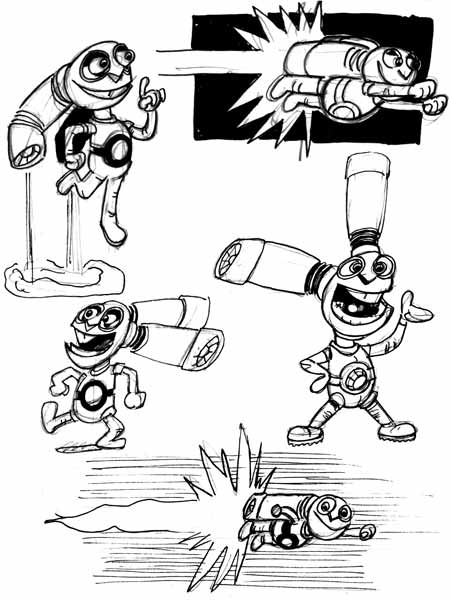 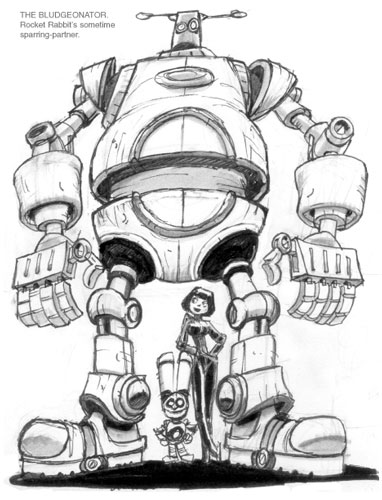 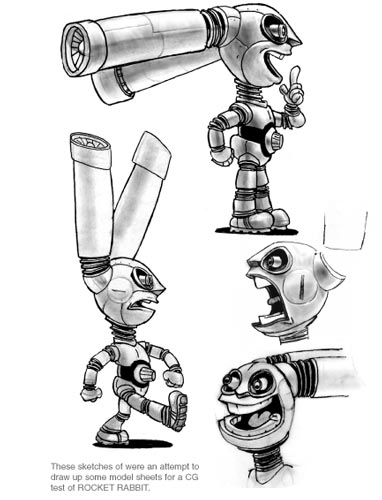 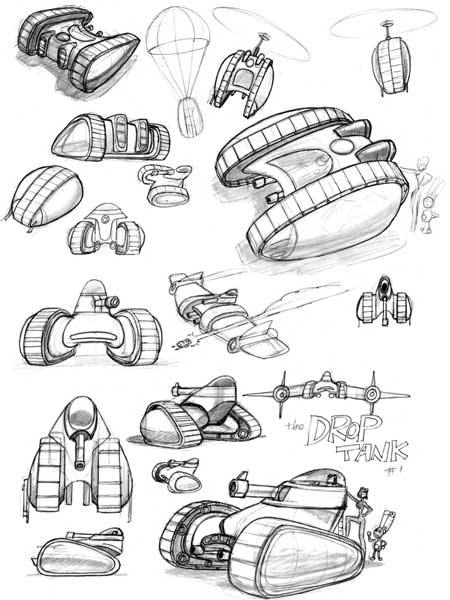 ..and ideas for covers as well 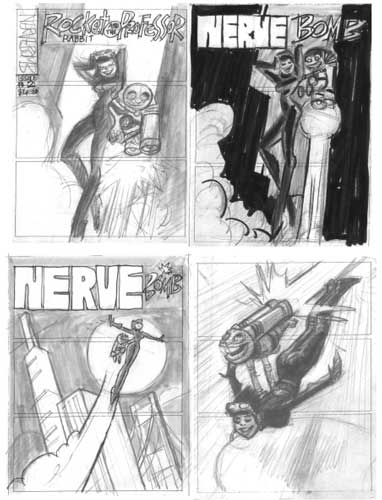 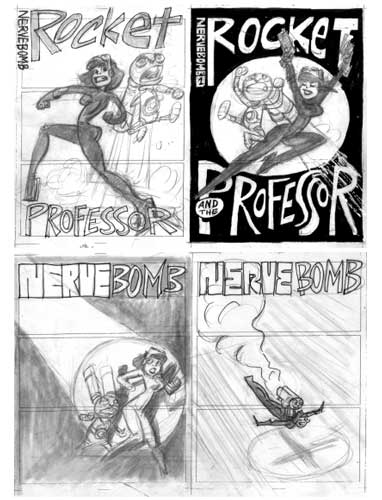 Some Rocket Rabbit reviews and a press release.